Power plants with solar thermal technology are continuously evolving towards the optimization and cost reduction. In this sense, one of the projects developed by Abengoa is the hControl project.

Abengoa, through Abengoa Research, has promoted for 2014 and 2015 the hControl project, which aims to develop a new control box with own hardware and software for the heliostat Asup 140, with lower costs and optimized consumption; which results in reduced costs of installing and operating the solar field. 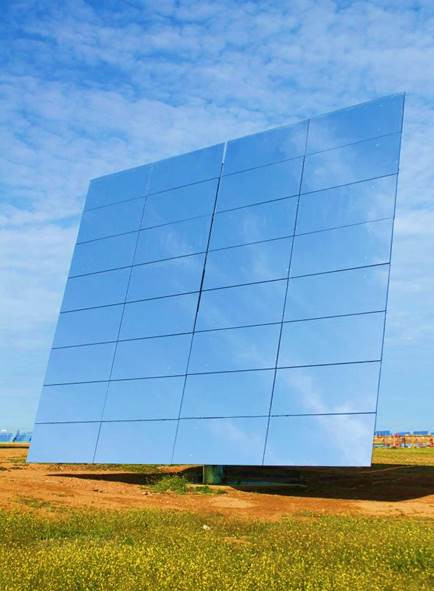 The new control box is composed of an electronic control card with microprocessor for communications and management, expansion card for control the components of the heliostat and a variable frequency drive for controlling the speed of the engine which drive the movement of trackers. With the new electronics a reduction in consumption of 40 % is obtained. The box also includes standard protection components like magneto-thermal and power supply. Additionally it is removed the oil accumulator in the hydraulic system and reduced the use of engine-pump, component with the highest consumption of the heliostat.

” The new development has been tested in operation at Abengoa’s facilities in Sanlúcar la Mayor.

The new development has been tested in operation at Abengoa’s facilities in Sanlúcar la Mayor in parallel to the current solution, which has served to verify the effectiveness of the changes.

Taking as reference the solar field of Atacama I project (Chile), with 10,600 heliostats of 140 m2, total savings by reducing costs in the control box and the hydraulic system and self-consumption reduction derived from changes described is 5 € / m2, a total of almost 7.5M €.

With this development the solar field is ready to implement a locally power supply obtained with photovoltaic cells, and wireless communications with the central control system of the plant, so that the solar field is autonomous. Considering than civil works related to the field wiring involves the use of more than 400 km of cable in a typical plant, making electrical trenches and corresponding supply logistics. All those improvements can mean, depending on the site where the plant is built, a significant additional savings.

The new box Hcontrol and associated improvements will be introduced in future projects of Abengoa.

Rafael Rus Palacios, member of the Electricity and Control Area of Abengoa Research – Innovation and Consulting