Solar energy drives our planet. All known sources of energy, both renewable and non-renewable, are produced directly or indirectly by the radiation the Sun casts down upon the Earth.

If we consider global energy consumption in the long term, we no doubt need to pursue sustainable global development. Climate change, the depletion of fossil fuels and the growing demand for electricity necessitate founding the future energy model on solar and wind power. Working in tandem, given that solar energy is produced during the day and wind power is generated primarily at night, they will enable us to meet a significant portion of base demand. The two energy sources make a perfect combination for laying the foundations for a new energy model in the short to medium term. 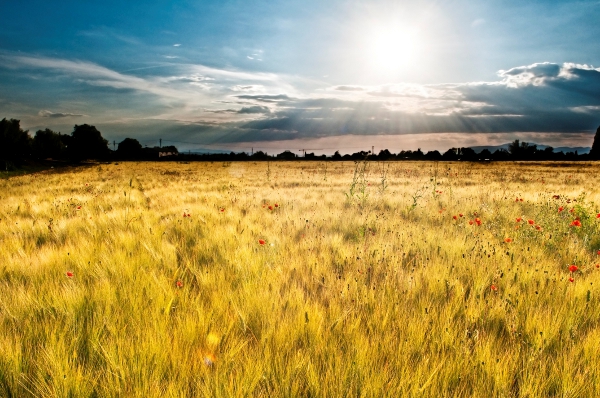 Solar radiation provides sustenance to all of the forms of energy found on Earth. In the case of wind power, its relationship with the sun lies in the movement of air masses which go from areas of high atmospheric pressure toward adjacent lower-pressure areas. These winds are generated by the non-uniform heating of the earth’s surface caused by solar radiation. In fact, between 1 and 2 percent of the energy from the sun turns into wind.

Wind power technology has seen tremendous development in recent years. Today’s total installed capacity amounts to 100 gigawatts worldwide, most likely due to the fact that it is an unlimited and well distributed source whose cost is becoming increasingly competitive. This cost competitiveness has enabled it to reach a degree of maturity of envy to solar technology; however, a cautious approach should be taken when comparing the two in this area. We must evaluate them according to the maximum technological potential they can achieve. Indeed, in the last few years solar energy has yielded much higher growth than wind power, although the starting point was highly different. It will therefore be difficult for the solar market to attain the level of installed capacity which wind power already enjoys by 2020. In any case, over the longer term, solar energy will most likely break the barrier. The reasons for this are the following:

1.- The technical features of solar power lend it the versatility to be able to meet the major share of electrical demand. The thermal storage capability of concentrating solar power technology enables the generator to adjust production to system demand. Another important advantage of solar power, moreover, is that it is easily managed by virtue of constant adjustment to a time slot.

2.- Solar radiation is a resource that is available all over the world at rates that exceed wind power by far. In fact, the “Global Energy Scenario. Energy Revolution” study conducted by Greenpeace in collaboration with the EREC demonstrates that the potential of solar energy is about fifteen times higher than that of wind energy. 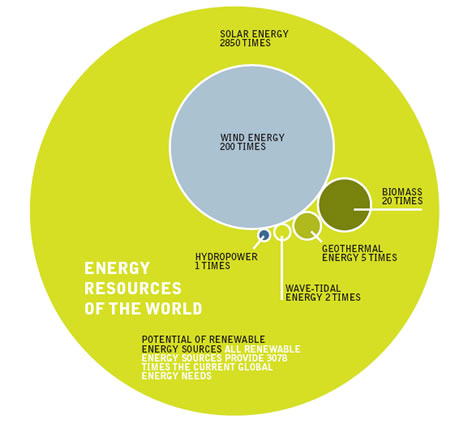 Potential of the different renewable technologies.

3- The availability forecasting we can perform for one source with respect to the other is another importance factor in this assessment. Solar energy is considerably more predictable than wind power, which gives it added value for electric utilities in helping to build a more robust and secure power grid, thereby decreasing the probability of malfunction.

4.- And we cannot dismiss the fact that solar energy can be combined with other technologies. For example, CSP technology generates electricity using the same method employed in today’s thermal stations (conventional cycle involving a steam turbine coupled to an alternator), although there exists the possibility of hybridization with  boilers fired by gas, biomass, biofuels or any other type of renewable or non-renewable fuel. This versatility lowers the cost of energy and ensures production for the electrical system.

5.- Furthermore, the immaturity of solar technology foretells a long path of growth, along which production costs will certainly drop considerably, an end point that proves more problematic for wind energy due to the degree of maturity the technology has already attained.

It is important to emphasize that it will be difficult for us to enjoy all of these benefits if governments do not back the development of solar energy with at least the same interest they showed at the time in wind energy. This support will be vital, at least until sufficient critical market mass has been created to facilitate cost reduction, and the price of fossil fuels includes the cost associated with negative externalities, such as emissions. This seems to be the only way to make a genuine transition from a fossil-based energy model to a renewable model in the shortest amount of time possible.

This widespread occurance of wind is what makes wind power such a promising technology. Those familiar with facts about wind energy know that over 50% of the United States can be used for effective wind generated power. The great thing about wind power is that it is renewable. We will never run out of wind! - My very own blog http://www.caramoan.ph/caramoan-matukad-island/